I’m driving down a never-ending dirt road, my body tossed around from an abundance of potholes. The bumps are jarring my already sore head and neck.  Rain is pouring down like a waterfall as I strain my eyes to see ahead.  I start to feel sick, so we pull over at a local McDonalds.  Still, I feel determined and hopeful.  It will all be worth it when I get to tomorrow’s Healing Festival in Pakistan, where tens of thousands of people are expected to show up…

Sometimes we experience times when we’re thriving on a mountain-top.  Those beautiful seasons where God’s blessings are so evident in your life they’re impossible to miss.  Other times, we’re simply trying to make it through the night.  Dark nights of the soul, when it’s difficult to see the light. This was one of those times for me.

It started six months ago when I was preparing for this trip to Pakistan; going to the gym, praying and interceding, continuing plans and relationships with my brothers in Pakistan, and making last minute preparations… then everything started to go south.

Two of my team members had to cancel.  My dear friend Paul Yadao and I would do this trip alone, but we had to fly in separately due to the security situation.  I made it to Doha, Qatar, but then the doors closed for several days.  Tensions escalated last month after a Pakistan-based terrorist group conducted the deadliest attack in Indian-administered Kashmir in 30 years.  As a result, the airspace over Pakistan was closed.

I asked myself, “Is it even possible? And am I really going to risk my life to continue on?” If I wasn’t willing to die for this, then I knew I shouldn’t go.  I felt prompted to move on, and despite the impossibility of the task, I made it to Islamabad.

It was late, and as I mentioned, I started getting sick on the hours-long drive to my destination.  The weather patterns had changed over the last week and become progressively worse.  The enemy knew something massive was about to take place, and territorial spirits went into overdrive. 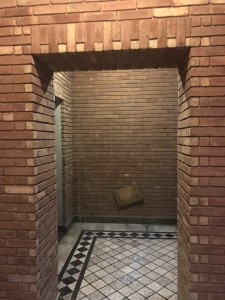 After driving through a warzone, I finally arrived at my room, which I’ve been calling my dungeon. Despite the situation, I kept thinking about all of those people who would be saved, healed, and delivered; whose names would be written in the Lamb’s Book of Life.  It was all worth it.

The rain got worse and I felt the temperature drop 20 degrees in the room.  The spiritual warfare was palpable.  I received a knock on my door and was told we’d have to cancel the healing festival since the fields were flooded.  How is this possible? I thought.  Could things get any worse? I felt that we had failed and the enemy had won.  But then everything changed.

How to Strengthen Yourself in the Lord

I recognized that I was sitting in Chair #2, meaning I was not thinking with a Kingdom mentality (read “Called to Reign” for more on the three chairs).  Fear and hopelessness had blinded me from seeing with Heaven’s eyes. I felt like a failure; like I had been forsaken, and that I was completely alone.  All of these were lies.

I remembered the verse God gave me before I came here: John 20:19-23.  Jesus’ disciples gave up everything to follow Him.  Now they’re trapped in a room because of fear, much like this dungeon room I found myself in.  The same people that killed Jesus were now coming after them.  But then Jesus appeared amongst them and gave them peace.  Jesus didn’t have to knock on the door; He is the door.

I invited the presence of Jesus into the room.  “I need you, Jesus,” I said.  “I’m in the middle of darkness, but I receive your presence.”  I forced myself to focus on His presence, not the circumstances. Then I asked for His peace.  I looked at his pierced hands and side just like the disciples did.  He can identify with anything and everything you’re going through today.  Finally, I asked for His provision.

At that moment, Jesus came into the room and I felt His presence fill it.  I felt His passion.  Jesus sat on the bed next to me and said, “Thank you for following me.” He wept with me that night over all that had happened; for the people who may not hear about Him on this trip.

I reminded myself that there is a purpose here.  “As the Father sent me, I am going to send you, Leif.”  Jesus provided the new power that I needed in that moment.  I took the new power, adopted a new paradigm, and changed my glasses.

The situation itself did not change in that moment.  But His presence was there, and I felt His peace.  Jesus said, “Thank you for not giving up, and for following Me all the way here.” I still felt like I had failed for a while, but Jesus stayed there with me all night, feeling what I was going through.  He weeps when you weep, and rejoices when you rejoice.  He is overwhelmed with joy when you refuse to give up on the darkest nights, because He knows spring is coming; a new dawn.

After these physical and spiritual storms, there was breakthrough! I knew I had to strengthen myself in the Lord and get up again.  I could hardly stand on my feet, but I just started walking and thinking, I have to keep moving.

From Breakdown to Breakthrough

The next morning, I sat for another 7-8 hours in vehicles over bumpy roads to attend a wedding, where I was the guest of honor.  I had a new mentality.  I was not going to give up.  His presence is going with me, and I’m just going to assist Jesus today. 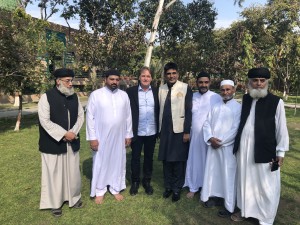 Suddenly, the weather patterns changed.  The very storm system that stopped the Healing Festival and tried to stop this wedding was stopped in its tracks.  When Jesus and I showed up at the wedding, it stopped raining.  The rain had formed a circle around us, but could not rain on us anymore.

From the moment of my breakdown to the encounter with Jesus, the thrill of breakthrough came.  From that point on, the trip was marked by miracles and favor! Several Muslim Imams were healed in the name of Jesus.  I was able to speak in one of the largest mosques in Pakistan.  And the Lord even opened the door for us to meet with the President and visit Parliament.

What a turnaround! My heart—and my Father’s heart—was broken for the people who could have been written in the Lamb’s Book of Life.  But now things are turning for His glory.  In Parliament, the government officially recognized me as an Ambassador of Love (read more about this in next week’s blog) in the records of the proceedings—the official books of the nation I love so deeply.  Things are shifting.

The fellowship of His suffering is to see what He sees.  If your story doesn’t yet reflect Jesus and His incredible blessings, it is not over yet. We’re going to heal nations, restore values, and give people hope to dream again.  Dare to believe.  Your sunsets will become beautiful sunrises.

Ask Him today to show up in your areas of deepest pain and let him walk through it with you.  You will walk into brighter days.