Throughout history, there have been several powerful movements of God. Countless revivals, miracles, stories, and encounters that the world couldn’t contain if they were all written down. There’s also been wars, chaos, and destruction—we touched on some of this in my blog last week and looked at why this happens. This week, I want to focus on how those movements of God throughout history have lined up with critical world events; and how 3 of these reformations transformed our world today.

Each reformation created a snowball effect producing several additional moves of God.  Each one restored a critical aspect of the Godhead to humanity that was lost in the Garden of Eden.  And a fourth key reformation is happening right now!

There’s a mirror effect with what’s happening in the spiritual and physical worlds.  With every major spiritual reformation comes a renaissance in the world.  The purpose of a reformation is to make changes to something with the intention of setting it back on the right path.  A renaissance happens when creativity and ingenuity are restored.  So when spiritual reformation comes, people experience God in ways that completely transform them; and society is propelled into a whole new era of advances in culture, art, politics, economics, and so on.  How fitting that the word means “rebirth.”

We saw this in the 15th Century during the time of Martin Luther, and it’s pretty incredible how that reformation led to one of the greatest periods of renaissance the world has ever seen!

1500s: The Reformation that Restored Jesus

We’ve all heard of Martin Luther and his 95 Theses.  In Luther’s day, there was a small group of elites in society.  These were the highly educated priests who stood in the gap between Heaven and earth. If you wanted a connection with Jesus, you had to go through them.  These elites held the masses in an oppression; one that looked like a third-world atmosphere for the majority of people alive. 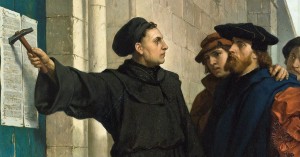 Luther, a professor of moral theology, received revelation from God while studying the book of Romans.  His 95 Theses were written to protest the corrupt practice of clergy selling indulgences, which would reduce one’s punishment in purgatory.  He argued that true repentance, freedom, and eternal life only comes through a personal relationship with Jesus Christ rather than ritual works.

Luther’s ideas were met with harsh criticism by the Roman Catholic Church—the unipolar power of the day which had become corrupt—and eventually led to his excommunication.  But they were also revolutionary to many uneducated people of the day, leading to personal revival and the start of a massive reformation and renaissance.  Justification by faith and grace alone was a key in this reformation.  It was connected to a value system: that Salvation is a gift to be received, not a problem to be achieved.

The Reformation period transformed Europe out of the dark ages.  In the marketplace, Gutenburg had recently invented the printing press.  After 1517, a printing revolution emerged as an agent of change to spread information. The Bible was printed and spread throughout the world at an unprecedented rate during this time.

Creativity was rediscovered in nearly every area of society.  Literacy rose dramatically.  The Middle Class was established.  And people began to see who God is for themselves, and as a result, received identity as priests and kings.  This rebirth in the spiritual realm directly reflected the rebirth in the world.  Jesus was restored to humanity.

Now there were still weaknesses during this time that reflected an orphan spirit.  Some Christians reacted harshly to the Catholics and protested (leading to the Protestant denomination and several others).  Though God was clearly up to something amazing, many people lived with a think-tank version of Christianity that involved division, debating, and removing the supernatural from daily life.

1900s: The Reformation that Restored the Holy Spirit

By the 1900s, the church had become powerless and operated like a religious system.  England was the unipolar power at the time, but it was starting to break apart.  This paved the way for the Welsh revival in 1904, which started after young people began to experience the reality of God’s power through the Holy Spirit.  The church exploded with the fire of Heaven and influenced Azusa Street, the second key Reformation in 1906 which lasted nearly 10 years! 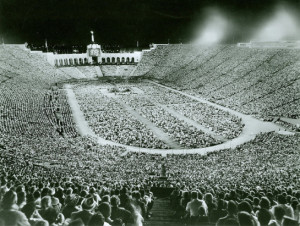 Azusa started in Los Angeles and was marked by exactly what the church needed at the time: an outpouring of the power of Heaven.  The Holy Spirit was restored to the church.  People started flowing in the gifts of the Spirit—speaking in tongues, giving prophetic words, and seeing miracles, signs and wonders everywhere they went.  Services were held around the clock as people couldn’t get enough of the Holy Spirit.  It was the start of the Pentecostal movement.

At this time, the Industrial Revolution was at its peak.  The manufacturing and production industry was booming, transforming rural and poor areas into modern powers and increasing jobs. Concurrently, the Progressive Era was happening in America, which sought to eliminate problems associated with political corruption, urbanization, and immigration.  It was an exciting time to live with new opportunities around every corner.

England was the world’s unipolar power during this time.  There was relative world peace, but England was breaking apart and losing its morality.  Germany took advantage of the power they were thriving under to gear up for World War 1.  Despite this, the power of the Gospel was spreading, but many were persecuted in the world and even in the church for things people had no grid for, like speaking in tongues.  Many didn’t know how to feel about Holy Spirit’s manifestations of power, which completely went against the culture of the day.

Still, His power couldn’t be stopped! The Azusa reformation led to many subsequent revivals.  After World War 2, the Latter-day Rain movement restored the 5-fold ministry and many were filled with the Spirit.  In the 60s and the 70s, America had entered a season of apathy and fear resulting from the rise of the Cold War, intense Vietnam War protests, and the first nuclear bomb test. During this time, the Jesus Movement was founded on love and led to the spread of evangelism and worship through contemporary music.

In the 80s, the Vineyard Movement under John Wimber led to the planting of hundreds of churches.  The Movement sought to demonstrate the power of the Holy Spirit through signs and wonders and was marked by many healings and intimate worship with Jesus. 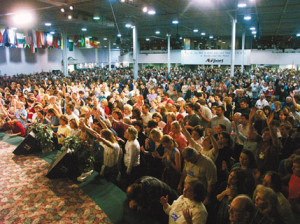 This paved the way for the Toronto Outpouring in 1994, which many referred to as the “Father’s Blessing.”  The outpouring started in a small church in Toronto led by John and Carol Arnott.  People came from all over the world to experience the Father’s love through signs, wonders, miracles, and more importantly, His contagious love.  In fact, there were so many visitors that this church was the number one tourist attraction in Toronto in 1994!

People took this revival home with them and it broke out in their own communities.  On Father’s Day in 1995, a massive revival broke out at Brownsville church in Pensacola. The Father brought healing, joy, and restoration; and it was the starting point of a whole new reformation.

Throughout history, these three key reformations restored Jesus, the Holy Spirit, and the Father back to the church.  This is why, in my last blog, I said that we’re living in the most exciting time in history.  God is setting up another reformation right now—a new wave of revivals and reforms—and it’s right around the corner! It has the power to stop the curse in America and all over the world.  It will set people free from the orphan spirit and restore the family culture of Heaven on earth.  It’s called the Agape Reformation, and I’ll talk about how you can recognize it and be part of it in my blog in two weeks.  Next week, we’ll look at what God is doing in the world through women!