One morning—years ago in the early days of my ministry—I heard a knock at the front door of my home in Norway.  It was during my office hours, but still, it was rare to hear a knock that early.  I was shocked to see a couple with their three children standing before me.  They clearly were not from Norway, and barely spoke any Norwegian.  Their eyes were filled with fear as tears streamed down their face. I slowly discovered that they were Muslims from Kosovo.  The Norwegian government had been debating around that time whether or not to provide asylum for Kosovo refugees, given the massacres going on in the 90s.  As it turned out, the government had decided to no longer provide asylum for this couple.  But if they returned to Kosovo, they’d probably be killed.

The police were already looking for them.  I was faced with a very difficult decision… Do I send them packing, or open up my small church and take a risk with an act of love? I decided quickly to allow them to live with us, and they did for 9 months.

Love costs us something.  It can cost us financially, practically, even socially as some church members were not very happy with me for doing this.  Eventually, the congregation came together as a family to love on them.  We started to eat together and watched them pray. It taught me how to love Muslims and tore down the walls of prejudice I had against them.  They were just ordinary people who loved their god and their family.  I didn’t realize at the time that they were enlarging our own hearts.

Most of the things I have authority over today started in moments like this. Sitting on the floor with them, watching them love each other, seeing their baby born in that church… eventually they were allowed to stay in Norway, and all of us have been deeply grateful ever since.

We are often so focused on what we’re against rather than what we’re for.  Are we for love, or are we against this and that? In a spirit of love and honor, I’d like to reflect on some of the things I’ve learned from Muslims.

THE GOLD I’VE SEEN IN MUSLIMS

1. After entering several homes of Muslims—including Muslim clergy—I realized that hospitality is a common part of their culture. Actually, I’ve never witnessed that level of hospitality before.  It taught me a lot about honor.  In the home of one particular man—who looked pretty intimidating in appearance—I watched a little girl climb on her dad’s lap, and he loved her just like I love my daughters.

2. I once held a unity meeting in the Middle East, inviting people of several different religions to come, openly converse, and find common ground.  Only 1 Christian leader out of the 16 I invited accepted my invitation, however, all Muslims that I invited were willing to come.  They wanted to take responsibility to be bridge-builders. The first step to heal and unite is often a willingness to come together and talk.

3. Years ago, I brought a top Muslim leader to Atlanta and asked if he would take me to a local mosque. I was amazed at his reception among American Muslims at the mosque.  They didn’t even know him, but they allowed him to lead their prayer.  He was one of them.  I’ve seen this happen in mosques around the world—they are included immediately, and I always am too as a guest of honor.  This is true community.

4. War is constant in several Muslim-dominant countries. They see these horrific things taking place and even mourn friends that die in battle.  I saw it there too.  Their ability to trust in their god when they don’t know what’s going on—even through the death of a family member—stretched my heart.

5. I remember one day when there was a plot to take my life in a foreign country. I had been staying there as the guest of a Muslim Imam.  He found out about the plot because of his position. But because I was his guest, he stayed in my hotel room with me all night to ensure I was alright.  He was willing to give his life for me.  He had five children.  I had to ask myself, Would I have done the same?

6. Muslims know the importance of honoring past generations. Many children grow up desiring to do the same thing their father or grandfather did.  Maybe they were a famous scholar or Imam, and want to steward what they perceive to be important to the next generation.  They honor heroes of their faith and culture.  Though this can be perverted when taken in a dark direction, at its core this is a Kingdom principle.  It produces deep roots.

WHAT JESUS TAUGHT ME ABOUT MUSLIMS

The more I choose to see through the eyes of my loving Father, the more I grow to love Muslims.  Ever since that first encounter in Norway, He showed me the benefits of taking risks; being willing to pay the price of love.  I could easily be crippled by fears—what society or religion tells me about them, what the police in Norway could have done to me, how my church community could have shunned me… but what would Jesus have done? Wasn’t He a refugee at times?

In 1995, I faced serious culture shock in Pakistan.  I remember driving through dark alleys and watching the city shut down at prayer time. There was a moment, in this culture, when an angry man swiftly came towards me shouting something.  I felt fear initially, but then realized… he’s not coming to hurt me.  He was bringing a quadriplegic friend who had broken his neck seven years earlier.  He heard me talking about the power of Jesus to heal and was hoping this Jesus would truly be alive.  He was hungry for a God that loves and heals.  And after his friend was healed, it opened up a whole new level of favor for us in that country. 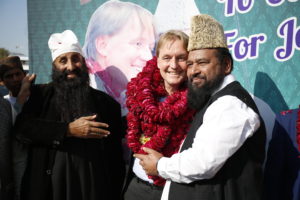 I’ve been all over the Arab world.  The UAE, Qatar, Pakistan, and so on. I have learned some amazing lessons. Perhaps none were more important than this: when I love without a hook or agenda, I easily and quickly find a place at their table, and they open up in return.  Love changes people and atmospheres and blows beyond our perceptions of “the way things are.”

After my baptism of love, I looked at Ishmael differently.  The truth about Ishmael is that he was a man rejected by his father seeking a place of belonging.  The cry of Ishmael at its core is a deep desire to be loved by the Father and find identity in Him.  The name Ishmael means “God hears.”  He hears their cries.

Out of the ashes of fear, racism, segregation, and every other problem, rises God’s answer.  He has a solution for each one.  And I’m just agreeing with God’s solution.  Am I free from a racist or prejudiced mindset? Because God is.  He is freedom.  There are a lot of deadly misconceptions based on culture, upbringing, and so on, but they will change when you seek His mind.

Even in my worst moments, Jesus loves me and gives me mercy.  It changes who I am.  I have become a change agent and now others can be transformed by His love through me.

Ask the Father, Son, and Holy Spirit to help you receive this love that He has for Muslims.  Ask Him to see people through His eyes.  Ask Him to see His solutions.  Then Islam will no longer be a problem.  It will be a promise.