Many years ago, I was at one of our healing meetings in Pakistan when a Pakistani woman came up to me. She had been healed at one of the meetings and for the first time, she experienced the love of God, the light of God and the goodness of God. Her husband, who had died a year earlier never experienced those things. He died in the darkness of hatred, an enemy of so many and for so long. As the joy of her new life subsided, a seriousness came over her.

“How long have you known about this Jesus?” she asked.

She paused, then asked a question I’ll never forget. “Why didn’t you come sooner? If you had just come a year sooner, my husband might have come to know this Jesus, might have been healed by Him, and I would not be a widow.” As she spoke, I realized that what she said could be the epitaph on the tombstones of millions of Muslims and unreached people around the world.

This story of the Pakistani woman and the millions like her are the reason I choose to love my neighbor and the reason I am willing to go to the darkest of places to reach those who need to know a love that looks like Jesus. This is what compels me and stirs me every morning when I wake up. 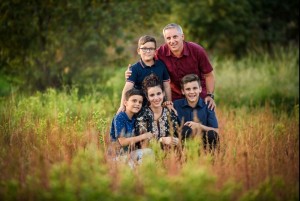 11 years ago, two of my friends—Benji and Daniela Morf—were called to minister in Asia among unreached people groups.  I imagine many people wouldn’t jump at this opportunity.

After all, there are many unknowns about unreached groups, and such a move would take anyone out of their comfort zones.  But they were obedient to His call and today they’re seeing an amazing reformation take place!

Just last month, I spoke with Benji and Daniela, whose ministry (Kingdom Family Multiplication) impacts 11 nations and 40 people groups.  They were recently ministering to a group of people in Myanmar and felt led to press into the presence of God and pray in the Spirit.  The glory kept building until an hour later when everyone broke out in a coordinated dance choreographed by the Holy Spirit! The people danced in circles within circles, each circle moving in a different direction.

Holy Spirit reminded Daniela of the vision Ezekiel had of the living creatures around the throne of God.  There’s a shift happening in the body of Christ.  There will be wheels within wheels—families working together as the Bride.  It’s no longer about what I’m doing in my life or ministry.  It’s about building His Kingdom as a family.  The people of Myanmar understand this well.  It’s the beginning of revival!

Say I have the cure for the deadliest disease on the planet.  Naturally, I’m going to administer the cure to as many people as possible.  Some people might not want the cure, which leaves me with two options: I could move on and try a new group of people who have never had an opportunity to get the cure.  Or I could keep asking the group that refused it, hoping that one day they’ll change their minds.  They need it, after all! They just don’t know it yet.

Believe it or not, this is reality in our world today.  There are roughly 7.7 billion people in the world.  Close to 5 billion of those people live in the 10/40 window, and only 7% of that window is evangelized.

People argue that we have a lot of needs here in America and Latin America, and that’s true.  But there’s a very big difference between going to places where people have access and opportunity to receive Jesus and have chosen not to receive him, and taking the Gospel to those who have never heard before.

There was a phenomenal movement in the 90s called the A.D. 2000 movement.  The purpose was to unify believers on a global level to get the Gospel to unreached people groups by the year 2000.  Roughly 300 million people were saved in this decade! But it was rooted in a skewed eschatology resulting from the orphan spirit.

Graph from the Joshua Project

After the disciples asked Jesus about the end times, he said the Gospel of the Kingdom must be preached as a testimony to all nations (Matt 24:14).  Nation is derived from the Greek word Ethnos, which refers to people of different tribes and tongues rather than a geographic location.  In the 90s, we were missing all the ethnolinguistic groups referred to in the Great Commission.  We were so focused on what we needed to do rather than who we needed to be.  While we were racing against a clock, God was looking at the harvest.

Why are we so focused on reaching the unreached?

It’s easier.  Wherever I go in America, I find people who think, Woah! The world is getting darker! But they’ve never seen real darkness. It’s just a comment made from their limited perspective.  When people talk about going to the 10/40 window, it’s often negative.  You’ll die if you go there! Those people are too closed off to hear the Gospel! But these statements aren’t true.  They’re an expression of convenience.  It’s much easier to stay put.  What they don’t realize is that we have the Gospel today because somebody else paid a price—not with their lives necessarily, but with their time, talent, and treasure.

The devil is distracting us.  He knows that an incredible outpouring of revival and restoration is coming.  He also knows that all he needs to do to prevent us from seeing that revival is distract us with busy-ness, fear, anger, lies, etc. As a result, we like to diagnose problems without doing anything about them.  The devil creates all these leaks in our lives and we’re spending time fixing all the leaks.  Read my last article to find some practical steps to getting rid of the leaks.

We have a wrong view of God.  If our view of God reflects how we see ourselves and the world around us, it won’t be accurate.  His character should reflect how we view everything else.  Sometimes we get this worldview that people have to be clean before taking a bath. But if we know that God loves sinners, and they loved being around Jesus, shouldn’t they love being around us? When you have issues in your life, God will turn TO you, not away from you. But the enemy uses guilt, fear, and shame to blackmail believers to keep them stagnant.

The good news is that Father God is bringing us a new paradigm! He’s helping us see that we don’t have a darkness problem in the world.  There’s simply an absence of light, and He has empowered you to be the light.  I can see several truths and prophecies in this new paradigm, but I’ll just name a few:

1. God loves this world. God is love, and He does  The entire motivation for Him sending his Son is that he loves this world and desires family.  Many people are asking, why has Jesus not returned yet? I believe it’s because the Father wants His family back.  He deeply loves the 40% of the world who still have little or no Gospel at all.  And He wants us to re-present His light and love to them.

2. In this new reformation, we’re bringing Heaven to people rather than bringing people to Heaven. Every believer is a priest and King.  Each one carries a lion and a lamb, and both are Jesus longing to get out of us and into others.  We should be a river, not a lake.

3. We are being called to disciple not only people but nations as well! This includes government, business, education, and every other part of society. We were called to disciple and change cultures.  But we need to step beyond the orphans and the poor and needy.  We need to let God transform people in every part of society, including those with influence over nations and mountains, through us.  The fire we’re seeing at the grassroots level needs to spread across the top of the trees to bring lasting transformation.

4. We’re seeing a unity and outpouring of the Spirit like never before. It’s the baptism of Love, and it’s killing the orphan spirit and propelling sons and daughters into atmospheres that previously caused them fear.  We’re starting to live from God instead of only for God.  He’s just waiting for believers to wake up and become family as He intended from the beginning.

5. Believers are being filled with a convergence love, power, and wisdom. We are worshippers and warriors.  We don’t feel like second-class citizens anymore if we’re not called to be missionaries. He wants us to thrive in our callings to write policies, control air traffic, become CEOs, teach children, or do anything else He’s called you to.  The people you influence at work or even in your apartment complex should see how good God is and how loved they are simply by looking at us—because we’re capturing the identity of who and Whose we are (John 14:9)

When you disciple nations, you’re not trying to change them—you’re immersing them into the Father, Son, and Spirit; into His family.  It’s a whole different way of living and loving.  It’s recognizing that you don’t even have to travel to change the nations. Most universities and businesses in America now have people from many tribes, nations, and tongues.  Ask Him for His strategy every day, and He’ll show you how to best spend your time, talent, and treasure.